SOOOO now my parents have left until friday.

and life can continue as usual.

Only today the little one we babysit isnt coming, which makes me sad.

This week I will be... attempting to start a new diet plan. I have grown disgusted with my body and I am determined to do something about it.

My dad has finally finished building the new back porch and it looks amazing! They will bring a patio table and we will have a nice place to chill outside soon.

We are still working very hard to teach the little one words and phrases, its been hard. she is very stubborn

so today i am going to rest and tomorrow I will hopefully get to baby sit.

So this week is, and has, been a hell week for me.

For reasons I will not discuss.

I am doing my best.

I finished rewatching Game of Thrones and I apparently restarted it again because now I am... watching it again.

the little girl we baby sit has found new words to say, such as "happy" and "party" and 'bite"

Tonight my husband cut his hair off to donate to make wigs for cancer patients. Its one of the most special things he does. He has really REALLY good hair.

We've been having technical problems with Paypal lately and its gotten to where I am fed up with them but i also dont know what else to do? this is how i get paid for babysitting. they've just been really sluggish with transactions lately or something. and it makes me more mad than it should, i know.

I recently caught my cat perched on the pillow at the head of the bed. I haven't been getting good photos of her lately. but here she is, 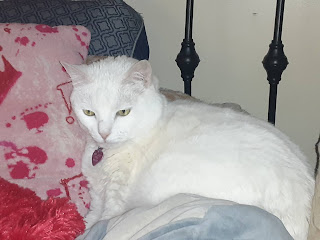 SO I FINALLY HAVE TIME TO UPDATE.

I have the house to myself for most of tonight, so I plan to do somethings I previously haven't been able to do. for example-- watch my friend play Legend of Zelda: Majora's Mask on Twitch!!! She and her husband stream zelda games on fridays and i have been missing out because we always have friday pizza night and my parents coming in from out of town.

but this time my parents have other plans and my husband is meeting his father for dinner (very excited about this, he hasn't seen his dad in a very long time and I know he means the world to him. I hope he will get some kind of pep in his step after seeing his dad for the first time in so long)

The little one I baby sit is adorable and just.... hilarious. absolutely the biggest comedian. and she knows she's being funny, too! she isn't even 2 yet and her personality is so huge, I can't wait to see her over the next year or two.

I have been rewatching the show Game of Thrones.  I do not think I will watch the last season, though.

My wildflower seeds have sprouted in abundance and I bought a spray bottle to mist and water them because they are so fragile and i dont have a watering can... so we just use a pitcher to water and it just completely knocks the little sprouts over. and i dont like that so i will mist them a whole bunch until the soil is moist enough for them to have been watered. lol

my parents bought me two succulent plants for my birthday, and my mom gave me one of my nana's pots that she had collected. so i put one succulent in that pot and the other in another pot... they are doing ok. haven't grown much or anything but they're hanging in there.

I bought a water globe that you stick in the soil for the peace lily that we have kept alive from Nana's funeral a few years ago. It was struggling and I really dont want it to die. I dont know how I would handle it. I'm still in the anger phase of mourning... I know I should move on but... they say everyone mourns in their own way and time,

my mother's dog is about 14 years old and has been coughing so they took her to the vet and she has a heart murmur. so she is on medication now, which is getting complicated because she's a smart dog and we are having trouble sneaking it in her food. i guess if worse comes to worst we can put it in her mouth and hold her mouth closed until she swallows it... hate doing that. really hate it. but sometimes you have to.

the garbage cart wheel fell off on wednesday so its stuck at the end of the driveways by the road.. i have been taking the trash out, putting it in my cars trunk, driving down there and putting the bags of trash in the can. i dunno what else to do. my mother gave me the waste management company number but we need our account number to tell them who we are and i dont have a recent bill to even know the account number. i might have to get my mother to dig it up somehow. because the cart has to be fixed, somehow. or replaced.

with the mask mandate dropped, along with the COVID-19 vaccine being available, i am not sure if my insurance will continue to cover the telehealth appointments i've had with my therapist and psychiatrist.

i hope they do. i dont see why they wouldnt. it just doesn't make any sense to me. insurance companies can be so stupid sometimes.

Don't be Afraid to Reach Out

i see you creepin'